The Importance of Making Special Recognition and Awards Day Inclusive, by Eileen

While inclusion is normal and quite successful in the classroom for award ceremonies and special recognition assemblies, it is still a rare occurrence for an NVLD student. This is because NVLD students generally have more weaknesses than most students, so honoring them can be challenging as their overall achievements aren’t as obvious. This type of recognition needs not to be so rare as recognizing effort should be as important as recognizing overall achievements when giving out these awards.

For example, while I was in high school, Penny Sharrow, my track coach, chose me as the most improved award winner despite the fact that I always finished races at the bottom of the pack. This was a surprise to many as, typically, the most improved winner was someone who made it to the top of the leaderboard after finishing in the middle during their previous years. My coach believed change was needed and that this was the perfect opportunity as I had lowered my time in the 1500 every meet that year after only being able to run exhibition sprint races the previous year. The crowd truly was so excited for me as students like me are typically left out of special recognitions. Receiving this award was a real confidence booster for me.

In addition, Jim Adams, my Cross-Country coach, chose me as the Sportsmanship Award winner twice while I was in high school. To me, this was incredible as I was honored with other kids from other teams in our section; therefore, it gave me a real sense of normalcy. However, just like at our district’s athletic banquet, it was clear that here I was the we 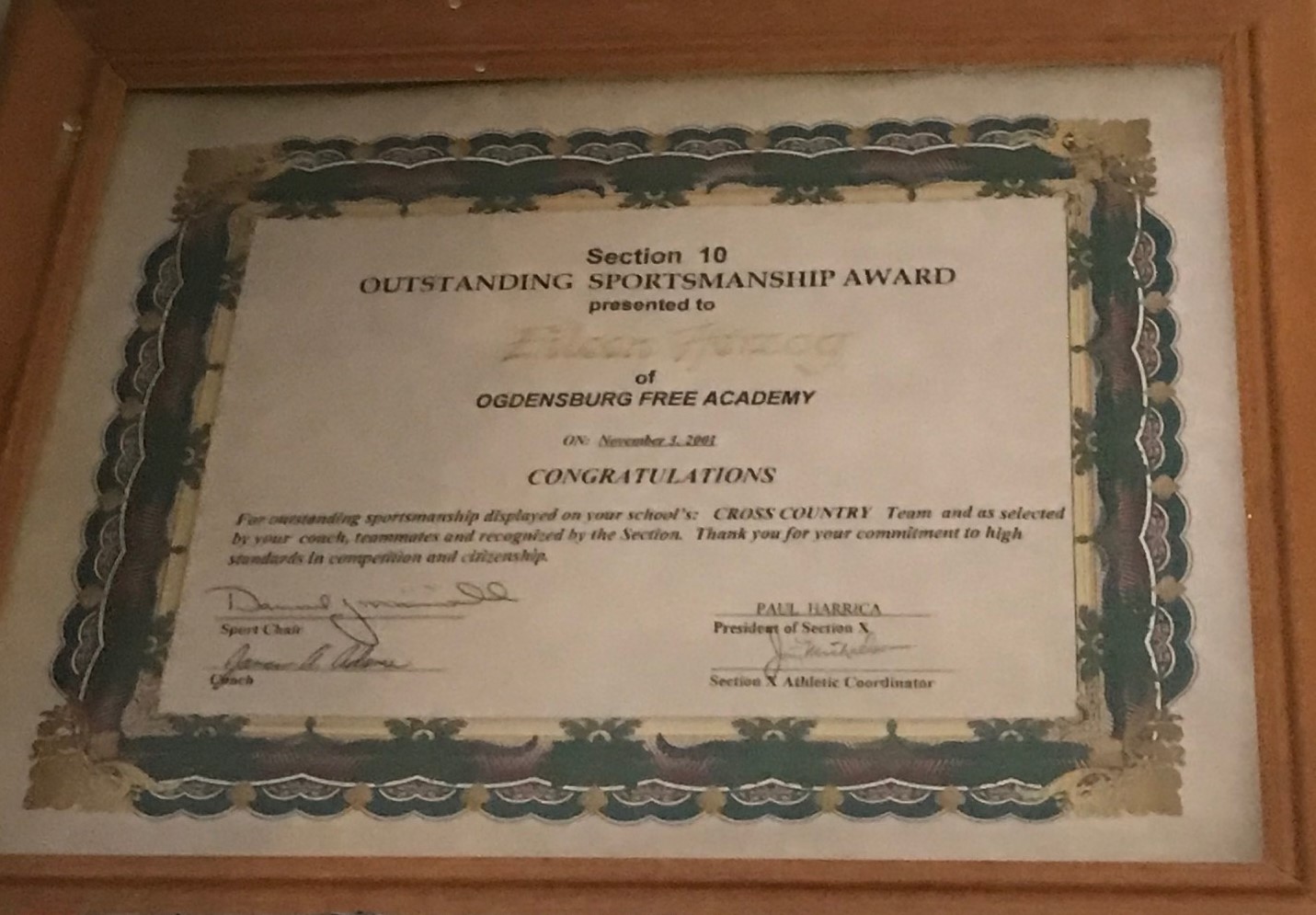 akest athlete chosen as I knew none of the other teams’ award recipients finished at the bottom of the pack as I did. Years later, I have talked about this award, and disappointingly it still surprises some that my coach didn’t choose a faster runner but instead chose a winner based on true effort. An individual’s progress should not be measured by how many places they go up on a leaderboard but by their level of hard work and overall performance. Winning this award was an incredible motivator for me to keep doing my best.

Receiving these and other awards motivated me to continue running throughout high school, where I was able to enjoy being recognized on senior day and attend a special gathering for seniors who were three-season athletes. It also made me realize my coaches really valued me, and this kept me coming back each season. Furthermore, what was incredibly special about this was my coaches, when talking about me, were nothing but positive despite the fact that I was the slowest athlete on the Cross-Country and Track Teams. This truly made me realize that recognizing excellent effort was important. Individuals like me work exceptionally hard and may only make small gains, but even the smallest honors can do wonders for them. I give credit to my coaches, Penny Sharrow and Jim Adams, for doing this and understanding that sometimes just finishing is the best the individual can do, and it is important to value it effort.

As you can see, none of the awards and recognitions I received were academic-related, which was disappointing. In my personal experience, it is a real reason why students with a disability like NVLD aren’t working as hard in the classroom as teachers may want them to, as they only see the top students receiving praise. Understand I am not taking away from other students’ achievements as they earned it too, although I believe that if you want students to always do their best, you need to show them that effort is important. It can be something as simple at the end of the marking period honoring a few students for effort regardless of their GPA. For example, have an all-star effort award in addition to achievement awards. Yes, there will still be some negatives as you can’t honor everyone though I believe more students would be willing to work hard by seeing a mixture of students being honored. Since students will understand effort is an important trait.

Overall it is my hope that more teachers will be like Penny Sharrow and Jim Adams and will start valuing effort more when giving out awards or recognition. I know how much of a difference being recognized makes from overcoming an NVLD and being close to others who overcome their own learning disabilities as they begin to understand their own strengths in the classroom. More importantly, you also start to realize teachers really do love to see effort in their students, and it will give them the courage never to give up.

Penny Sharrow and Jim Adam are forever my two biggest supporters as I learned so much from them and just amazing people!