As a professional with NVLD (Board Certified Cognitive Specialist) and former special education teacher, I offer you a different perspective from these vantage points.    Whether you’re a parent or an adult coping with NVLD, you’re all too familiar with often falling short of meeting the standards of neurotypicals (NT).  NT’s comprise the majority of the population whose brains typically function in the same way.  NVLD’ers are in the minority who think differently from NT’s, and thus are part of the neurodiverse (ND) population.  NT’s are often unaware when communicating with someone who is neurodivergent as there are no outward visible signs to the naked eye.  When ND’s fail to meet NT expectations they are often met with resistance. They are not privy to leeway, assistance, or courtesies that are extended to those with visible differences.

NT’s often feel annoyed when communicating with NVLD’ers.  While being bombarded with repetitive questions it appears as if their answers are being ignored.  NVLD’ers are equally frustrated, if not more, as they are often unable to comprehend what is being said due to deficits in processing non-verbal communication.  Answers to their questions must be precise and detailed or they may not understand.

As a result, NVLD’ers may appear as if they are not listening, argumentative overreacting, resistant to suggestions, constructive criticism, or differences of opinions. It’s not always apparent to NT’s the underlying anxiety that has triggered these emotional reactions and behaviors.  The intensity of the latter varies according to the age and situation of the person, from an all out meltdown, yelling to stomping, crying, arguing, retreating, or quitting.  Subsequently they are often deemed to have character defects and can be tagged as  overly-sensitive, annoying, difficult, bossy, controlling, lazy, emotionally unstable along with a host of other negative connotations.

According to William Dodson, MD, it’s estimated that children with ADHD receive a full 20,000 more negative messages by age 10, on average than those without ADHD.  While we don’t yet have the research on NVLD, it’s safe to say these findings would be similar due their overlapping symptoms and struggles. Across the lifespan, NVLD’ers are given so much negative feedback that many have developed a “chip on their shoulder” of defensiveness, causing them to be in a hypervigilant mode ready to protect themselves. These negative messages trigger emotional reactions not only to the current situation but to a lifetime of compounded negative feedback as you’ll see in the following example of Kyle (name has been changed).

Years ago, Kyle, one of my 12 year old students overheard me in the school parking lot asking his father to “give my car a jump.” His literal processing of my words and confusion was evident when he asked “Why do you want your car to jump up and down?”  When I explained to him that I didn’t want my car to “jump’ up and down”  and those words were a “figure of speech” he became very upset.  He claimed I was lying to him and that’s not what I said. Kyle insisted he was “right” and I was “wrong” by repeating verbatim what I said.  He became almost inconsolable as if his reality was being denied for he knew the meaning of the words. Although it appeared as if he was overreacting, the truth is the situation was a trigger for the overwhelming amount of  times Kyle had misunderstood others. He didn’t believe me until he saw his father connect the cables from his car to mine to “jump” it to start.  Despite knowing individual meanings of the words within a sentence we can’t assume those with NVLD understand the overall concept is understood.  While this is an example of a child it also affects adults within the context of the situation.

Bethany was in school for training to receive various computer software program certifications to improve her skill set and income in the workforce.  She was used to learning the information from her instructors and applying it during hands-on learning computer class time. After a certain amount of time students were expected to demonstrate their proficiency through testing.  When the testing format changed from being untimed to timed, Bethany had a meltdown.  She had difficulty taking the test within a limited amount of time due to her difficulties with executive functioning, which is common for those with NVLD.  The school administration gave her a warning for what appeared to be “inappropriate behavior.”  She was told if it happened again she would be expelled from the program.  At the time Bethany was unaware she had a learning disability and therefore missed out on receiving accommodations to help compensate for her weaknesses.

It can by trying for NT’s to cope with the invisible causes of difficult behaviors.  I have worked with many well-meaning and loving parents who are at their wit’s end trying to prepare their children for a future of independence.  It’s important to remain calm and avoid getting into power struggles in the heat of the moment.  The best course of action is to walk away, take some time to decompress, and revisit the situation when everyone is calm.  Be mindful to approach possible upcoming triggering situations with a proactive trouble-shooting approach as opposed to a reactive one.  In return your child, significant other, or employee with NVLD will greatly appreciate your understanding and acceptance, therefore being receptive to working with you rather than against you.

Below are a few examples of strategies to try in different situations to reduce triggers that can cause emotional upsets.  They can easily be adapted  to varying ages and environments (work, home, school).  You can also share this article with others who interact with you or your child towards meeting some of the needs of those with NVLD. 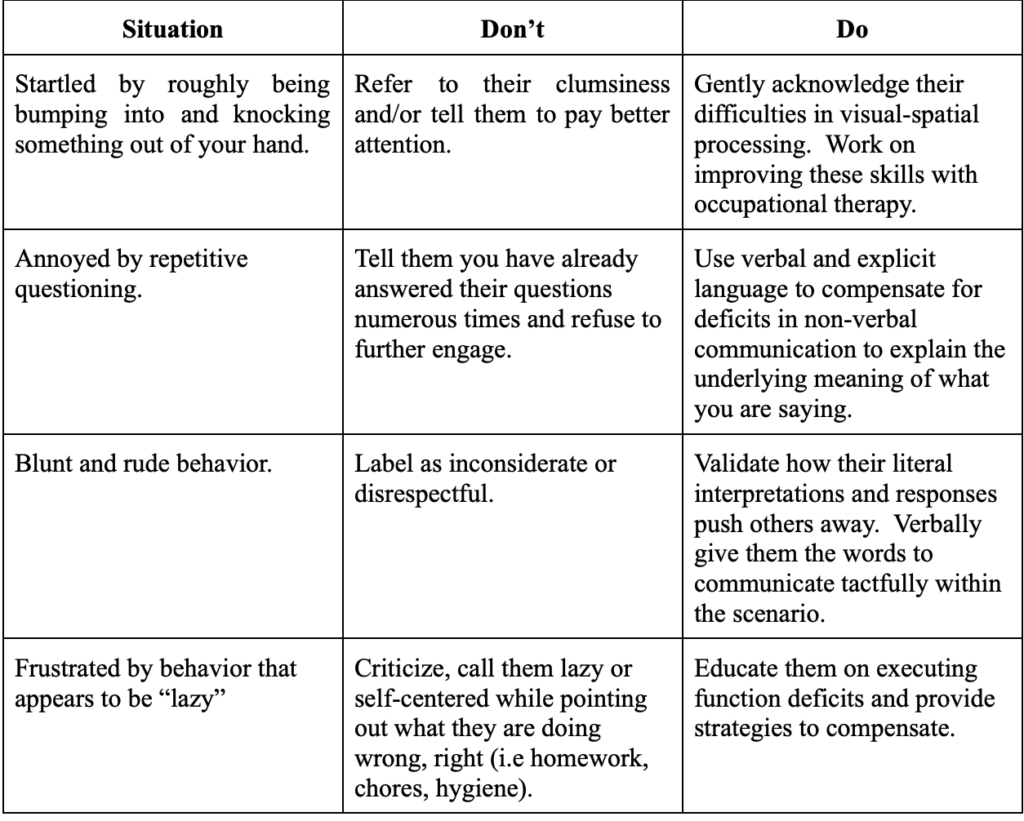 Individuals with NVLD can become discouraged with the amount of effort it takes to overcome their frustration when communicating with others.  Provide encouragement by pairing positive reinforcement with teachable moments.  For example, you can say, “I like the way you repeated back to check you understood what I said before asking questions.”  Repetitive positive reinforcement produces the desire to continue learning despite their difficulties.

Keep it simple and to the point, remember the research of William Dodge. Don’t over explain – it can seem like a lecture.  Remember, some days can be exhausting for NVLD’ers as they continually are “masking” their deficits to appear neurotypical.

Stating the actions needed to get the desired results is impactful.  Action produces motivation not the other way around.  If we wait until we feel like doing something nothing would ever get done. Reframing teaches this concept.  For example, saying “If you use deodorant, brush your teeth, and comb your hair it will help you to make friends.” Reframing this points out the desired outcome as opposed to “you’ll look so much better if you would just comb your hair.”

Use the skills you are teaching when communicating with an NVLD’er.   Be cognizant of your body language and facial expressions to help them decipher your feelings and the meaning behind your words.

Using these steps will help individuals with NVLD accomplish their goals, build confidence, and importantly counteract the invalidation and criticism they have experienced.  This encourages them to keep on taking risks towards living fulfilling lives.  Give it time as we live in a world where immediate feedback is the new normal. Like the tortoise and hare, persevere and take the slow and steady approach with these steps.  Reach out to others for support, educate yourself about NVLD, and seek out the help of professionals when needed.

Linda Karanzalis, MS, BCCS has over 25 years of experience specializing in working with individuals with NVLD, ADHD, and learning disabilities.  In 1997 she founded ADDvantages Learning Center in New Jersey to students of all ages to reach their potential through executive functioning training, social-emotional skills development, and parent coaching.   In 2020 she presented on NVLD at the Learning Disabilities Association of America’s national conference.  Linda is a Social Ambassador for The NVLD Project and has served as a chapter coordinator for the non-profit organization CHADD (children and adults with ADHD) Karanzalis was recognized as one of “South Jersey’s Top 35 Superwomen” in 2012 by South Jersey Magazine for her contributions in helping others to achieve success.   www.addvantageslearningcenter.com