Two years ago, I was only the third parent to post a blog on the NVLD Project website. It is so wonderful to see how many people have found it and now know that they are not alone.

I would like to share with you the many ways Anna has progressed because so many of the people who have contributed seem to be discouraged.

We have had the advantage that, because we homeschool, we have never had to fight school systems and unknowledgeable (I don’t want to say ignorant) administrators, therapists and teachers. When our doctor asked Anna if she felt self-conscious about her speech abnormalities, she said “no”, which was a relief to me, as far as her emotional health, but, at the same time, was probably an indicator of her NVLD: she wasn’t aware of her lisping. He was very teachable about NVLD and the Gut and Psychology Syndrome diet we were attempting (Dr. Natasha Campbell-McBride, MD). While her homeschool group friends did not reach out to her very often, she did have some friends, often those who also had learning challenges and she was never left out of activities or made fun of. The other moms were there to nip that in the bud!

While  she is becoming more aware of her oddness (she said she was glad she wouldn’t be sharing a room with our exchange student because she “didn’t want to freak her out”) she has been overcoming many of her NVLD difficulties. 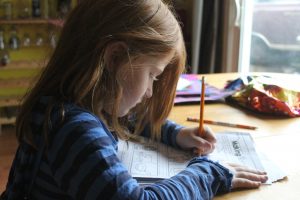 We were introduced to “Disconnected Kids” by Dr. Robert Melillo by the pediatric chiropractor. “Disconnected Kids” was designed to make the therapies taught at Brain Balance Achievement Centers accessible to families with insufficient funds or who lived too far away from a Center. He also listed NVLD in the different diagnoses one might have! His point is that, instead of focusing on a child’s strengths (they don’t need any help), helpers should focus on strengthening the weaknesses so the weak side of the brain can catch up with the strong side. We spent a whole summer going through his exercises, everything from smelling strong scents to spinning around on a chair to standing on one leg. Her handwriting improved dramatically. She used to get lost going to the library which required only one turn from our house. Later that summer, we were on a local field trip with the homeschool family only a few blocks from our house and she asked if she could go home by herself. It included a walk down a street she had never been on before, cutting between two churches and across the neighbor’s lawn. She did it! And she wasn’t afraid to take it on!

Anna has been seeing a craniosacral therapist in conjunction with a chiropractic treatment. She has been addressing a lesion on Anna’s small intestine  which she identified (Gut and Psychology Syndrome assumes an unhealthy gut, allowing toxins, specifically from grains and unhealthy oils to get into the bloodstream and thus into the brain.) The lesion is healing. She is also addressing Anna’s vagus nerve, the one that extends down the neck on the right side and connects with digestion. Early in my research, one commonality among NVLDs was a minor birth accident to the right side of the brain. Anna was identified in utero by the midwife as leading out the cervix by the right side of her crown, not the top. As a result, she turned her head and was actually delivered facing my leg, not front or back. We took her to a chiropractor at birth who dealt with what she identified as a trauma, but, after a couple of months, we discontinued the treatment. Now, however, we see the connection and are addressing it. The chiropractic treatment is to intensify the effectiveness of the craniosacral therapy. Dr. Roger Sperry won the Nobel Prize in 1981 for establishing that “90% of the stimulation and nutrition to the brain is generated by the movement of the spine.” One of my favorite books is “Last Child in the Woods” by Robert Louv. He discusses how being outdoors can ease symptoms in ADHD, ADD and autistic children. It follows for NVLD, as well. Both Dr. Melillo and Dr. Campbell-McBride recommend lots of Vit. D. So, outdoor activity contributes in many ways to improving brain health.

The three aspects that Dr. Melillo addresses are sensorimotor, diet and academic. GAPS doctor Campbell-McBride also discusses academics. Both of them admit that school can actually finish the job that sensorimotor and diet begin. Specifically with NVLD, abstract thought and spacial awareness need to be taught. So, since Anna is now technically in high school, we are doing high school courses which are, by nature, abstract. She and her 12 year old brother are doing “Drawing on the Right Side of the Brain” by Betty Edwards. Simply stated, it is drawing what you see, which is the kind of training an NVLD needs. The 12 yr old is better than she is, but she is doing well. The book includes guidelines for teaching children. We are also reading “Moby Dick” and discussing the imagery in it. She is also responsible for washing a mountain of dishes, which she does, and she is becoming better at it all the time, aware of when things didn’t get fully clean and willing to re-wash them.

Does she read a book and not remember who the main character is? Yes. Does she take things personally that weren’t intended that way? Yes. Does she make personal comments that are inappropriate? Yes. Do I still have to do every long division problem with her? Yes. But, does she get jokes? Yes. Does she understand interactions, inferences, and personal references on television shows now? Yes. Does she get literary imagery? Yes. And we live in the country, an inconvenient distance from a major metropolitan area and yet we have found resources that have enabled her to grow and change and be “less NVLD” than she was. And we will continue to look for those resources as she shows interest in doing on-line college.

Shannon is a homeschool mom of 10 (only 12 years left to go!) who teaches all levels all subjects.