Guitar and NVLD, by Michaela

I was ten years old when I picked up a guitar for the first time. I named her Gloria. I started taking lessons months later, in fifth grade.

I wasn’t diagnosed with NVLD until I was 14. But back then, it was known that I had some struggles with my fine motor skills. After practicing guitar though, transitioning between chords soon became effortless. 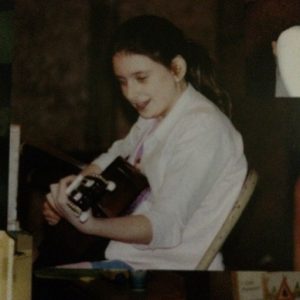 Sixth grade came around. I was beginning to struggle more in school because of my undiagnosed NVLD. I was failing tests, even in subjects I was good at in the past. Without an explanation to my parents, I stopped taking guitar lessons. I picked up Gloria every so often to play, but it didn’t feel the same. Until recently, I never really addressed why I quit. Looking back, I stopped taking lessons because I was losing confidence in my overall abilities, in part because of my struggles in school. 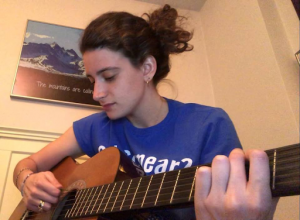 I picked up guitar again last year (in 2018) after a hiatus. I still remember most everything I learned years ago. Because of my visual-spatial processing issues, it can be hard for me to learn to read music on my own. But, I have increased confidence in my abilities now. I’ve posted some guitar videos to social media and played at several open mic nights at coffee shops (which has taken some courage to do, I’ll admit). I’m so grateful for everyone who has supported me. I’m 24 now. I graduate with my Master’s Degree in Social Work very soon. I wanted to be a social worker because I want to work with individuals with learning disabilities, and part of my job is to give advice. As cliche as it might sound, my advice to everyone is to never give up on doing what you love. As I wrote in my poem about having a learning disability, “Realizing,” “it’s hidden talents and strengths.”

To my fellow NVLDers and everyone with any kind of learning disability: uncover those hidden talents and strengths, like guitar.

Water them and they’ll grow.

I’m a lover of nature, poetry, and iced coffee (in my humble opinion, the only coffee truly worth drinking). I’m naturally extroverted, and I think of myself as a people person! I’m studying to become a social worker because I want to be able to help individuals with learning disabilities just like me! I am a Project Social Ambassador for The NVLD Project.