Having NVLD can make it difficult to understand social and communication clues, which can make forming relationships an obstacle. Two examples of when I experienced these challenges were meeting Dick Christy, my school counselor, and in 8th grade, hanging out with the “wrong crowd.” I just couldn’t pick up on the clues from Mr. Christy that he truly wanted to help me and ‘my friends” were only making fun of my NVLD. 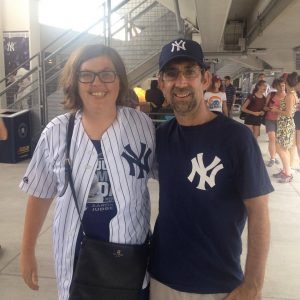 I remember walking into Mr. Christy’s office for the first time and feeling incredibly scared by all the serious questions he was asking me. Each of them made me think he thought my low grades and absences were due to laziness and rudeness. Towards the end of meeting was what made me the most uncomfortable was when he said “Eileen I want to see you once a week” as I thought for sure he found me to be a messed up person who needed a lot of help. Regretfully, it wasn’t until I started to have multiple seizures that I realized he cared about me and believed in me, when later that day he called my home to check in on how I was doing. Upon my return to school, I remember him telling me “If you become overwhelmed, my office is always open and I will do whatever I can to help you.” I was so touched and thought I wish it didn’t take a difficult situation to see how much wanted to help me.

The next situation where my NVLD caused an obstacle was when I started to hang out with a crowd who were constantly making fun of my NVLD, though I didn’t see it until a bad situation occurred. It was at the first track meet of the year when I realized it as they got me to do an awful prank. I was devastated to learn the truth, though, on the positive side my coach redirected me to a few varsity members on my team who better understood my challenges. Throughout the season, I sort of became their “little sister” and they made sure everyone was treating me well. I was so grateful that my coach did that, otherwise I am not sure who I would have had as friends.

My advice for you is to explain your NVLD so the people in your life can be aware of the challenges, as it is much easier receive support when people know about your disability. I know in my heart if I were more open to Mr. Christy about my disability I would have discovered he was going to be my number one support sooner than I did. I also know if was more open up about my NVLD behaviors with my peers I could have made a healthier friendships while still in high school. It can be difficult however; in the end, it will make a big difference, as you will know who will truly support you and who won’t.

I love going out to dinner and to sporting events with my true friends!