Why Every NVLD Individual Should Take Up Cycling, by Kristen

‘Mama Tried’ is a song by Merle Haggard, as well as a good summary of my mom’s determination to find an athletic activity that suited me, her neurodivergent, six foot tall, thin-then-chubby-then-normal, daughter.

NVLD throws a lot at you, and a huge part of this is physical coordination. My mom, an avid dancer and former cheerleader, tried to impart her love of movement onto me. But oh man, did I struggle! Tap dance was boring and focused on precision, ballet involved too much twirling and made me dizzy, and jazz required too much coordination.

Okay then, Kristen can stick to the Electric Slide and maybe a square dance or two. We’re white, we can use that as an excuse. Let’s find a sport for her, instead!

Oh, sports. Basketball was even worse then dance for me, as I am extremely tall for a girl, and it was always assumed I’d be a good center. Nope! If you’re too uncoordinated to be a good dancer, there’s a decent chance you’ll probably not be able to be exceptionally talented at a sport that requires quick turns, social cues, and other nonverbal gestures. Oh, well, I guess I’ll use these long legs to reach some cans on the top shelves.

I liked soccer for a while, but the obsessive competitiveness that became a part of it as I got older drove me away. With my nonverbal disability, having to focus on a ball, as well as the behavior and movement of over a dozen other players, all at the same time, would stress me out so badly that I would have to put headphones on and blast repetitive soundtrack music to calm down after a match. Ugh. At least I liked running.

Now, on that note, running. 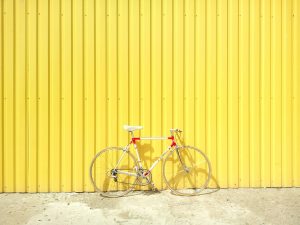 Namely, long distances. Journeys. Anything that involved getting from Point A to Point B was something I always adored, and it never changed. I also lucked out by growing up in an urban neighborhood that was very bike friendly, and some of my favorite times with childhood friends was riding our bikes to each other’s houses, around our massive parks, and maybe ending up at Walgreen’s or Borders to goof off in the aisles and do stupid things with the cream cups for coffee.

As a kid, I didn’t pay attention to the mileage that I was logging on my 10-speed, if Anna or Jenny were faster than me, or what my heart rate was. I simply loved going fast and feeling the wind on my face. I loved that my brain didn’t have to play visual catch-up with social interactions, which were exhausting and distracting from my sport. For a lot of individuals with NVLD, this social break and sensory calmness is exalting. We love it, and it re energizes us.

Additionally, riding my bike made the playing field equal in terms of coordination. It didn’t matter who could move quickly, or who could dance around a court. It was all about speed, endurance, and distance.

I ended up loving sports that involve cardiovascular longevity in high school, naming track and singles tennis. When I arrived as a freshman at the  University of Oregon, I was in for a cornucopia of athletic activities that worked very well for someone with my less-than-stellar coordination due to NVLD. From white water rafting, to ultimate frisbee, rock-climbing, fly-fishing…there were so many athletic activities to take part in! I was so active that, upon descending from the plane after my freshman year at Oregon, my gathered friends and family worriedly thought that I must have somehow obtained an eating disorder, I had lost so much weight!

But my biggest love still, was being on my bike.

When I began graduate school shortly after graduating from undergrad at Southern Illinois University, I immediately took up cycling. Even when my brain was exhausted from quantitative methods (one of the less pleasant experiences as a NVLD), tired from leading classes or managing museum volunteers, my body could handle it by taking it out on a bicycle.

Oh, and Carbondale is surrounded by national forests and state parks, which made it especially easy to get lost in the woods.

Best of all for a neurodivergent like myself, cycling is a sport that requires not only little coordination, but little socialization, in order for the rider to engage with other participants. Sure, I’m in a group of individuals as we biked across the different roads and forests near the Ohio River, and I have to pay attention when someone is moving up or drafting. But I don’t have to watch their faces or hyperfocus on their movement in order to enjoy the sport.

When we truly engaged socially, it would always be after a long ride, when our bodies were tired, and the endorphins had put all of us into a laid-back, if not jovial, mood. I never had to focus on drama, on who hated who, or anything else that other sports or activities required.

Now, my biggest concern isn’t coordination or social skills, but free time! I work a very demanding job, on top of finishing Grad Degree #2 and running a busy house with a small family. I continue to cycle when I can, either in a spin class or on my bike with my toddler hanging on the back.

Best of all, spin class may be the best thing ever for neurodivergent folks who are stressed in social situations, but crave to be around other people. The class is dark, the socialization is over once the door is closed, and the spin instructor on their bike almost never calls out anyone, except to encourage them. It’s perfect.

So, if you’re an NVLD individual and you want to get in shape, get a bike.

Kristen is currently finishing her doctorate in Curriculum and Instruction at the University of Illinois while working as a non-profit director and wrangling pets, a child, and her red-headed Texan husband. She loves cycling, fiber arts and coffee.