Living with NVLD, by Erica

I don’t even know where to begin. I had a learning disability for a long time. Academically I did ok except for math and taking notes.  I was unable to make friends, was clumsy, and not included in social groups. In elementary school I was in a special gym class. I hated it. My mother constantly had me evaluated and tested. I wanted to be a normal kid. As I got older the constant special help led to anger behavioral problems which led to more exclusion and then removal from the family and dcf involvement. My life has been hard.  The hardest part is not being able to relate and connect to others through friendships and relationships. I feel so alone in this world and feel misunderstood. END_OF_DOCUMENT_TOKEN_TO_BE_REPLACED

The Normal and Careless Mistakes I’ve made in NVLD Life, by Jennifer

Have you ever made what you would consider a careless mistake? Or made so many mistakes at work that you get fired or lose count? I have done all of those because of the NLD. I have made many mistakes in my life and at work, big and small ones. I’ll give you a few examples. END_OF_DOCUMENT_TOKEN_TO_BE_REPLACED

Self Help for Improving Visual Spatial Skills in Those with NVLD, by DK

My story is so long and I’ve explained it too many times to have the energy to retell it.

Believe it or not, I am a successful visual artist. Searching to advance in my painting practice, I’ve found a couple of fun and challenging activities that work well. It is not a cure, but daily practice of these activities does lead to gains. I have been helped a lot by playing Quizbit, alone. This helps with mental rotation, visual-spatial reasoning, and fine motor skills. END_OF_DOCUMENT_TOKEN_TO_BE_REPLACED

My Struggle With NVLD, by Sara

For the longest time, I didn’t realize anything was wrong with me. I was doing good in school with straight A’s, but I had no friends, and couldn’t seem to make any. No one wanted to play with me or invite me over, and I didn’t know why. Flash forward 8 years and I’m thinking I might have autism, based on the things I had seen online and the people I talked to. It took about a year to get the diagnosis of NVLD, and I didn’t understand it. I still don’t a year later. END_OF_DOCUMENT_TOKEN_TO_BE_REPLACED

The Art of Perception, by Myk

When I was younger I always viewed or defined myself as cool or relatable. As I progressed through life, this perspective eventually melted away. It did not help that I would move around a lot throughout my childhood and thus I was the perpetual new kid. On top of that unfortunate title, I was also a little off and I was not sure why. I would not know what I would do or say but just by simply trying to interact with peers I would be met with laughter. Even though many of these elements have been discussed in prior blogs, I will dive into an aspect that I have not fully embraced in past articles, this aspect is perspective. As mentioned earlier, I would think that interacting with others was fine and without a challenge. What I did not know was that the way that I perceived my self and my actions was far different then how my peers viewed me. END_OF_DOCUMENT_TOKEN_TO_BE_REPLACED

You may not believe this, but at 57, just last night, I was able to see how socially different I have been throughout my life than all those around me.  How awkward, of course, but far different than that; the only way I can explain it is to say that it felt like I have lived inside an invisible can throughout my life, and its walls separate me from everyone else. There was no way to bridge that gap. The first day of kindergarten I just stood and wailed, alone, as the rest of the class walked single-file to a room down a long hall. At the start of 2nd grade we moved. I would stand alone in the school yard, trying to disappear, and became non-caring inside my can. I cared for others, and wanted to connect, and felt awkward interiorally, but another part of me let go of the thought of being an outsider and caring what others thought, and just sank deeper down inside my aloneness, within my own world. It was as though my interior world became more far more real than the outside world. Years later my mother would say that I “lived on Saturn.” END_OF_DOCUMENT_TOKEN_TO_BE_REPLACED

You may have seen the Oscars and the assault on Chris Rock and wondered, “What was that?! Why didn’t Chris step away? Couldn’t he see he was being aggressed upon?” Well, maybe not.

While most people can discern others’ nonverbal cues to assess their emotional state, Chris could not accurately perceive the anger on Will Smith’s face and the visible aggression in his gait. Chris’ difficulty in perceiving Will’s anger, shown nonverbally, likely stemmed from Chris’ Non-Verbal Learning Disorder (NVLD). NVLD is a learning disorder that affects a person’s ability to read social situations as well as analyze and synthesize different channels of incoming information. Like many people with NVLD, Chris Rock struggles to understand social cues and manage social interactions. END_OF_DOCUMENT_TOKEN_TO_BE_REPLACED

Crip Time Is Necessary For My Survival, by Megan

Time is restrictive, and normalcy is an illusion. My piece is a personal invitation into what life is like living with a non-verbal learning disability and chronic illness. My piece illustrates how my life is a balancing act between managing and prioritizing medical appointments, tests, medication, University, work and rest. My body and mind are continually working three times more against the clock only to complete half the amount of work compared to neurotypicals. My piece is an illustrated personal collective of ableism, self-care, resiliency, and access needs. I used a black acrylic background to highlight how time becomes immeasurable. The various nature objects express my continual need to be in touch with nature as it’s critical to my self-care. I incorporated the use of a pine needle branch to paint water, as water is healing and nourishes my soul. The sticky notes reflect echoes of ableist comments I’ve received. My goal is to emphasize how Crip time is necessary for my survival. 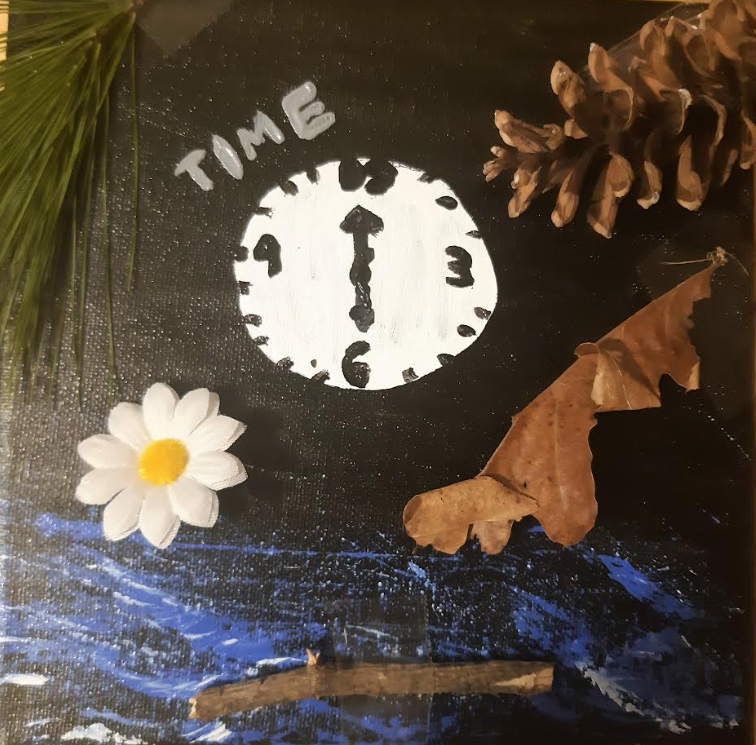 END_OF_DOCUMENT_TOKEN_TO_BE_REPLACED

The Importance of Making Special Recognition and Awards Day Inclusive, by Eileen

While inclusion is normal and quite successful in the classroom for award ceremonies and special recognition assemblies, it is still a rare occurrence for an NVLD student. This is because NVLD students generally have more weaknesses than most students, so honoring them can be challenging as their overall achievements aren’t as obvious. This type of recognition needs not to be so rare as recognizing effort should be as important as recognizing overall achievements when giving out these awards. END_OF_DOCUMENT_TOKEN_TO_BE_REPLACED

Update on my Journey to Florida, by Ryan

I have been living in Florida since the end of July. In that time, I feel I have done a lot. There is always something going on. The things I have done are see the area, join two kickball leagues, join some Jewish groups, and made some great connections with work. Lastly, I had gained some private clients for my business. Although my parents have been here now since Thanksgiving and sometimes it gets to be a distraction to me. I try to give them space. I know I will miss them when they go back to Pennsylvania. That is why I am trying to learn as much as I can from them. My dad is helping me out with learning new recipes and meal prepping. My mom is helping not rush with emails and being more organized. I am grateful to have two amazing parents.

If anybody has any questions about my journey feel free to email me at rhlundy85@gmail.com.